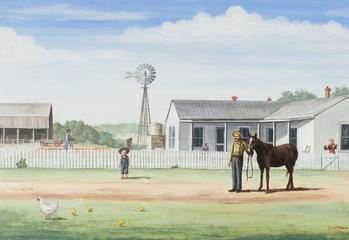 The Braeutigam family purchased the abandoned Fort Martin Scott in 1870 and made it their home and also operated a saloon known as Braeutigam's Garten.

After the U. S. Military abandoned Fort Martin Scott in 1866, local residents scavenged the site for lumber and stone for use as building materials. The property owners, John Twohig and J.J.B. Wright, endeavored to lease the site, but before long, few of the fort buildings remained in tact.

The 640-acre tract of land containing the fort grounds was sold in 1870 to Johann Wolfgang Braeutigam. The Braeutigam family farmed the land and re-purposed most of the remaining fort structures, utilized the stone guardhouse for part of their home and constructed other buildings, using remaining lumber and stone left at the fort. During the ninety years of occupation by the Braeutigams, the family built a large barn, kitchen/root
cellar, garage and converted the old commanding officer’s quarters into a saloon, which was known as Braeutigam’s Garten.

Many notable events occurred during the Braeutigam’s occupation of the property. Aside from being known as a favorite respite spot for locals and travelers alike, Braeutigam’s Garten was home to the first four Gillespie County Fairs, which is the oldest and longest continuously running county fair in Texas. Sadly, it was at Braeutigam Garten where Johann Wolfgang Braeutigam, John W. as he was known, lost his life during a robbery of his establishment in 1884.